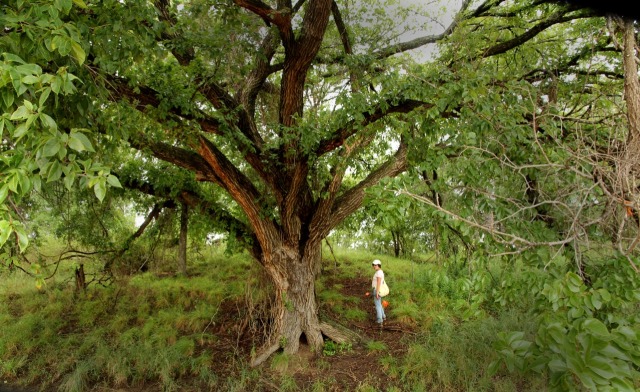 What can we do to help more elms like this grow in our woods?

Getting Started: Making Decisions on the Ground

After years of wanting to improve a brush-smothered woodland, the day finally came to quit thinking about it and get started. When Dale Schmidt arrived with his equipment on January 24, the ground moisture was still high, thanks to the heavy rains we had received last fall and early winter. Our first decision was when to schedule the work. If the ground was too saturated, Dale’s skid steer would make deep ruts and compact the soil. Worse, he might even get stuck.  Yet I didn’t want to postpone the date indefinitely, waiting for  “perfect” conditions, because I’d hoped to sow seed in the cleared area no later than the end of February. If the ground became too dry, the whitebrush would be hard to lift without breaking off.  Fortunately, Dale has the experience to judge on the fly when his equipment enters a boggy area. Dale and I conferred and decided to go ahead and make the best of it, even if it meant leaving some of the brush intact in the 4-5 acres of the project area.  Dale attached the rock rake to his skid steer, and got to work.

It was exhilarating to me, to say the least, to watch Dale begin to work.  He drove straight into the dense thicket of white brush, first making inroads to maneuver around and lift up the brush. The front-loaded rock rake was an excellent tool, for it pulled up the whitebrush, roots and all, while most of the sandy loam soil sifted back to the ground. The rake then carried it to various piles we had previously marked with flagging (some were old brush piles that were never burned).  Earlier, I had also flagged a few spindly cedar elms that I’d hoped he could avoid. For most of the first day, Jack and I stayed out of Dale’s way and worked around the perimeter of the area, cutting down persimmon trees that had encroached upon a majestic stand of live oaks.

Making Decisions on the Fly

The second decision we had to make was to determine how thorough Dale should clear. I wanted a magic number to guide us as to what percentage of the dense whitebrush should be removed to avoid immediate re-growth and threaten all the gains of this initial effort. Is it 50% or 90%? I had shown Dale a tall pecan tree toward the north end that I’d hoped could serve as a visual marker of the end of the project area, but neither of us could predict how fast the work would go – that would have to wait until after the first day of Dale working as hard and focused as possible. The first day Dale was able to “clean-clear” I would say 75%-of the whitebrush, removing most of the roots and stems, and stack it in piles.  Yet it was clear that he wouldn’t make it to the pecan tree if we continued at this pace,

We decided that the best use of the equipment was to “rough clear” the remaining area, leaving a greater number of stems and roots in the ground compared to the first day’s work.  Rough clearing would at least make it possible for Jack and me to enter formerly impenetrable areas to slowly continue “editing” more whitebrush and catclaw vine over time, and also treat prickly pear and tasajillo, much of which had been spread by hogs.

As we got to the north end of the project, the soil became softer and heavier with moisture, and Dale backed off when he noticed his wheels making ruts.  Because of this, my expectation of clearing all the way to the first photo point was not met, but instead we expanded east and west, resulting in a wider but not longer project area.

After the first day’s clearing we discovered some hidden treasures: several magnificent post oaks, a long seam of granite outcrop, some hackberries, post oaks, and cedar elms that had been smothered in brush.  Dale’s training as a Texas Parks and Wildlife biologist meant that he was far more than an equipment operator.  He was totally collaborative with me and supported my goals. While he drove his skid steer hard like a rented mule, he also noticed more small trees trying to grow through the brush, and he avoided those areas. Most clearing jobs I have noticed do not have this approach of slower, careful removal.  It's definitely a trade off, but since our goal is to speed recovery of this woodlands vs wholesale clearing, we find it's worth it.

The third decision was to agree to exchange more area of total removal of brush for a slower, more careful pace that would preserve naturally occurring tree seedlings. In this way, the clearing proceeded in a somewhat organic manner: The result was a “mosaic” pattern where some smaller thickets remain for habitat cover, leaving the rest as more open to potentially develop into a savannah grassland model.

It was a thrill for us to be able to clear and burn the brush piles on the same day. We decided to have a number of smaller brush piles rather than one or two massive ones. Dale brought his propane torch to light the green wood, and from time to time he would fluff the pile to speed up the burning.  Most of the burning was finished before the end of the project.

On the third day, Dale swapped the rock rake for the stump bucket, and began to rough grade the cleared area.  I followed and broadcast a custom seedmix of little bluestem, side oats grama, sand lovegrass, green sprangletop, sand dropseed, “Blackwell” switchgrass, plains bristle grass, and inland seaoats.  When I had finished, he returned and used the bucket to “back drag” over the area, covering and compacting the seed into the ground. This is a somewhat primitive method, but, as many landowners know, you do the best you can with the equipment at hand.  The timing of the seeding was more critical to me than the method (wish I had a no-till seed drill!).  About 1/3 of the project area was left unsown, to compare natural recovery with sown areas.  Now all we need is rain!

What is the work worth?

Besides the uncertainty of grass germination, the last question for What amount of steady, incremental follow up is needed to preserve most of the gains we made in the initial hard work of clearing?  What new plant species will appear?  These and other question will be interesting to follow, and I will try to keep up with regular observations.

I will admit right now that this project may seem more like large scale gardening than it does ecological restoration.  To owners of large properties, the money we spent on four acres makes no damn sense.  Yet I wonder if some of the questions and natural processes I mention here are the same for both a small intervention and a large scale one.  If a landowner had his own equipment (an expense), and wants to diversify habitat (as opposed to just “mowing” brush to create temporary pasture), would these small scale brush clearing activities make sense? Would the methods and equipment be the same? For us, the value of investing in this work is that it provides us with an experience. We now have the opportunity to watch all the natural processes unfold in an area that was “stuck” in a condition of low diversity.  Our property is surrounded on all sides by solid thickets that will likely remain unchanged. All we can do is to share what we each have done on our own property, and hope that both the mistakes and victories will help the next person decide how to intervene on Nature’s behalf to help the landscape heal, diversify, and improve.