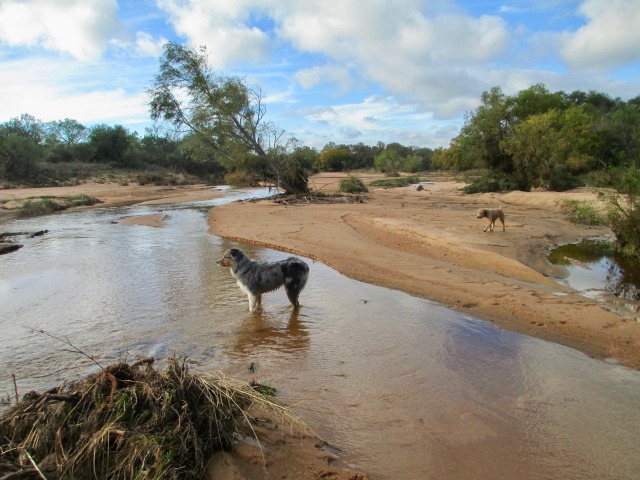 Hank waited 5 months to soak his feet in Marshcall Creek.

Jack’s Paw-Paw used to say, “After a drought in Texas, there always comes a flood”.  That is sure true for this October.  In my last report late in September we had received over seven inches of much needed rain. Then on October 18, we had over 12 inches, which left us stranded at our place for three days.  Marschall Creek, which feeds into a larger tributary of the Llano River, runs through our property, had been bone dry since June.  For nearly a week after the intense rain event, it looked as wide as the “normal” flow of Llano River itself, with roiling waves carrying heavy timber and other debris.  Soon this water would cause flooding downstream and eventually top off water levels in the Highland Lakes.

With little grass surviving the summer drought, the land’s capacity for slowing down and absorbing some of the rainfall was diminished.  I worried as I saw the organic litter on the ground surface stripped away.  Newly germinating wildflowers and hardy forbs like western ragweed make the ground look green, but we won’t know if the grasses will return until May.  Once again, the warm season grasses will likely have to push through a heavy mat of cool season introduced species like Japanese brome and perennial rye. Adding to the challenge is the reduced availability of seed, since there was little or no seed production this fall. I think the real picture of resiliency and recovery will emerge in 2020 or later.

Meanwhile, the record flood did a number on Marschall Creek.  Because it had been a long time since a flood of this magnitude flushed out the creek, a great deal of brush and trees had grown tall in the middle of the creekbed, making it hard to cross or even see to the other side. Beavers had also built small lodges here and there, which over time had trapped other debris and formed islands in many places.

The flood changed the flow of the creek by depositing several feet of granite sand and forcing the flow into one main channel instead of several smaller ones. Several impounded ephemeral pools built by beavers were either filled in, or opened up to the greater flow of the main channel. In some places, the flood scoured the creek down to bedrock granite, where water flowing over rock riffles now makes a sound – something that we seldom heard on the sand bottom before.

Now the creek looks like one endless Saharan sand dune, delineated by a silver ribbon of water that winds around larger remnant islands stacked with flood debris.  It will be interesting to watch if the flow in this one channel will have more duration compared to the smaller runnels that in the summer usually disappeared, soaked up by the drying sands.

Fortunately, we had good grass cover along the banks, especially switch grass, Lindheimer muhly grass, bushy bluestem, yellow Indian grass, and others that held the upper banks so we did not lose any trees in the upland edge. However, hogs have been worse than ever on our place since last fall.  Many places where we had established grass have been tilled up and turned into bare soil, inviting both those wonderful wildflowers, but also invasive plants like Malta star thistle.  I have been wandering the fields, spraying patches where these plants are most dense, while they are still in the rosette stage. I have found a 1% (I oz./gallon, with surfactant) solution of PasturGardHL to be very effective.

I think it will be fascinating will be to observe the recovery of Marschall Creek, as seeds in the sand and the remnant vegetation of important riparian species such as cattail ,bulrush false willow, switch grass, and other plants are still present in patches to provide a seed source with the potential to colonize all these “beaches” that the flood has made.  I have set photo points and will take pictures to record what happens when.  Flooding, when it doesn’t involve loss of life and property, can be an important healthy cycle in the natural processes. To learn more about how to identify the plant species that are important to recovery of healthy riparian areas, go to: www.remarkableriparian.org. I recommend this field guide and information-packed publication to everyone.  Another resource is a video produced by the Hill Country Alliance:  https://www.hillcountrylandtrust.org/hclt-videos.html : “Riparian Zone Management/Healthy Waterways”.

When it rains this hard, the benefits of moisture can reach a tipping point and become a negative factor.  Erosion, scouring, loss of property and infrastructure quickly match the long drawn out pain of drought.  It’s definitely a game changer.

Recap: I learned from a friend that those abundant caterpillars I saw on the grasses in September are army worms: Spodoptera frugiperda, a dreaded seasonal invasion that can ruin hay fields and crops.  They appear when the moths arrive in late summer to lay their eggs, and the larvae are voracious.  As we walked through our property in late October, almost all the remnant grasses we saw had been cropped by these caterpillars - another reason the grasses produced little or no seed this year.  Not even the early succession species like hairy and Texas grama were able to make a comeback.  I like to think that the birds and turkeys benefited from the bumper crop of caterpillars.  They had very little to eat going into fall before they arrived. Again we are reminded that there are always winners or losers in any natural event.