Yellow is the Color of Western Soapberry 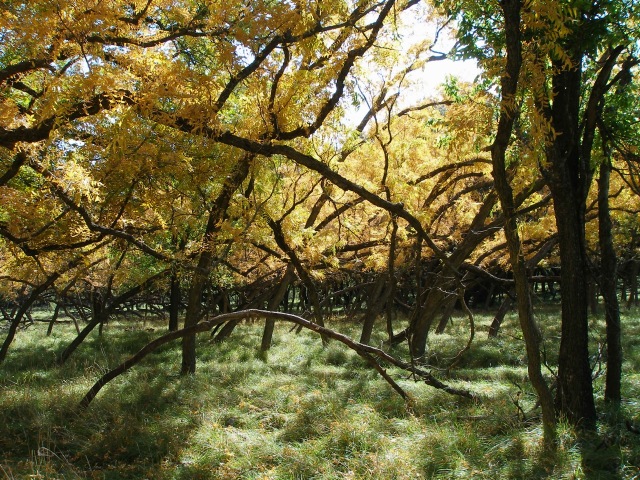 We started seeing fall foliage change colors about two weeks early this year. During the second week of November, there was not a breath of air, few birds were singing, and temperatures were close to ninety degrees. Tiny white and yellow butterflies flickered among the parched grasses as summer seemed to linger on and on. Although we had some surprisingly abundant rain in August, and a few decent rains in early September, for the past seven weeks the weather has been stuck on hot and dry. The result is that Nature seems to be suspended between the seasons – too hot to feel like fall, and no moisture to germinate and nurture wildflowers and cool season grasses.

It’s disappointing to see the ground drier in November than it was in August, but these tough conditions do result in more fall color. Late summer rains kept the foliage full and green, until the “flash drought”, and a short cool spell in late September triggered the annual process of shutting down chlorophyll in the leaves. As chlorophyll breaks down, the yellow and orange pigments (carotenoids) are revealed. Other chemical changes may occur through the development of anthocyanin, which produces red and violet colors, as in sumacs and Spanish oak leaves

The Western soapberry (Sapindus drummondii var. drummondii) foliage is particularly striking in one location on our place. Years ago, we removed the persimmon and white brush growing beneath this lovely tall stand of live oaks. In addition to the brush, the oak trunks were densely woven together by thorny canes of cat briar (Smilax bona-nox).  At the time, we never noticed any small soapberries growing where we had removed the brush. We later identified an aging, broken small soapberry across the trail, which must be the unlikely parent of so many others growing beneath the oaks. Soapberries tend to form colonies by sending underground stems or rhizomes away from the parent trunk to more open space.  You can see soapberries forming thickets with many trunks along a fence line, though they are all essentially the same plant.

Is this what happened here? Soapberries do not seem to be browsed by deer, possibly due to the presence of suds-forming alkaloids or saponins that give the plant it’s name. Were the rhizomes waiting for more light and space to step forward? Will soapberries in turn dominate the live oaks as the persimmon and white brush once did? The other mystery is that we are now “suddenly” seeing more soapberries throughout the property in areas where we seldom noticed more than a single isolated tree here and there. Were they there all along and we just didn’t notice? What conditions have favored them?

One of the most beautiful fall foliage displays I have seen in Texas was during another warm October, near San Angelo along the Concho River. Western soapberries were the dominant tree in that landscape, and they were all on fire with their yellow leaves forming golden bowers for us to walk beneath. Soapberries are among the more drought tolerant of our trees.  As our climate continues to warm up and dry out, will they become as prominent here as they are in places farther west? We won’t remove them for now, as oak wilt is still a threat in our area, and recently we learned that some Texas Forest Service foresters are now thinking that cedar elms may be susceptible to Dutch elm disease. This threat is just one more pressure on our declining woodlands. All we can do is to continue to watch the soapberries along with the other plants for signs on how Nature adapts to climate change that is now upon us.