What Does It Take to Become a Post Oak Tree? 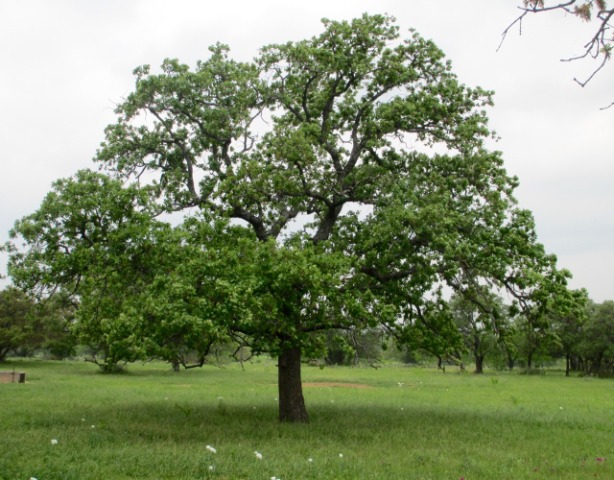 The mighty post oak (Quercus stellata) is my favorite tree. I never tire of admiring its sturdy trunk and rugged, muscular branching, especially in winter. The deep, furrowed bark, irregular arching crown, and dense foliage give this long-lived tree a distinct and dignified character. Post oaks belong to the white oak group of the oak family, and typically grow between 35-50 feet tall. Their leaves are leathery with five bristle-less lobes lined with minute downy hairs on the underside.

Post oaks grow throughout the eastern half of North America, as far north as Nebraska and as far west as west-central Texas. In Texas, they occur everywhere except the High Plains and the Trans Pecos regions.

Post oaks evolved to survive fires by developing a thick, fissured bark.  Foresters have used the post oak in fire surveys by analyzing the tree rings to surmise the history of fire in the area. Tree rings from post oak timbers used to build cabins by pioneers as far back as the 18th century have been studied to better understand the long-term picture of drought cycles and climate change.

Historically, post oaks were so abundant in some areas of Texas, that an entire eco-region (the Post Oak Savannah, west of Ft. Worth) was named for them. Sadly, in other parts of the state, their numbers are rapidly dwindling.

Post oaks have had a prominent role in certain areas of the Edwards Plateau, including the Llano Uplift or Mineral Region, where our place is. They prefer sandy or gravelly soils, including the relict locations of ancient alluvial gravel bars. Often you can detect a change in soils by noticing that post oaks are growing more abundantly there instead of live oaks or other species.

If you take a closer look in the Texas Hill Country, you will notice that post oaks are not naturally regenerating, and it is getting harder and harder to find decent numbers of young trees replacing the aging ancestors.  The biggest reason for that is that too many white tailed deer and exotics put a lot of hurt on young seedlings.  The other reasons include the erratic extremes of climate cycles that have occurred in the last fifteen years or so.  Post oaks are drought tolerant, but they are less adapted to boom or bust cycles in which a very wet spring is followed by a flash drought with high temperatures, as we’ve seen since on and off since 2006, Typically an older post oak tree won’t suddenly die in the way a live oak will after contracting oak wilt (post oaks are not susceptible to oak wilt). And while they can be decimated by hypoxylon fungal canker, they typically do not die rapidly like a Spanish red oak, but instead, they succumb to these ubiquitous soil-borne diseases more often after a slow decline after other stresses have weakened them. Periodic infestations of the wooly aphid can decimate their foliage, but most can recover if given some extra attention through compost mulching and irrigation. In an urban setting, post oaks cannot tolerate soil compaction (as after construction) or any change in the grade, either piling mulch up the trunk, or cutting down lower than the root flare.

After the 2011 drought, it was painful to see so many dead post oaks, black jack oaks and hickories that we once abundant among granite boulders or on granitic, sandy soils. They just fried. It’s clear now they will never be replaced in equal numbers.

On our place, we have post oaks in scattered locations, and all of them are beautiful, but aging. We have never seen a young three to ten foot tree. After some hard searching, we found about ten small (3-8”) seedlings growing beneath several mature trees.  We immediately caged them.  Although this inspired me to look for more seedlings, even in the exclosures we had built around small groupings of post oaks, I never found more.

For the last several autumns, I have looked for acorns on our trees. For such a large tree, post oak acorns are tiny: ½- ¾” in length, with the cup covering half of the acorn. Post oak acorns require a year to mature, so essentially the tree has ripe acorns every other year, if the weather cooperates. Occasionally along the road I had spotted a tree that had dropped a lot of acorns, but the trees on our place had never set enough acorns so that you would notice them.  What is the evolutionary advantage of producing such a tiny acorn?  Despite what we see at our place, do most post oaks benefit from producing a large volume of smaller acorns that perhaps can remain viable on arid soils longer than, say, a bur or even Spanish red oak? Does that spread risk for the tree?

Last fall I took my bucket of approximately 50 acorns from a half dozen trees, and planted them in soil I dug from beneath the parent tree mixed with compost/soil. I wasn’t sure if the acorns required some indigenous soil organisms to thrive. I planted them immediately after gathering them so that they wouldn’t dry out. I placed about a dozen seeds each in several 3-gallon pots. Oaks typically extend their root first before the stem when they germinate, and I wanted the roots to have plenty of room.  Acorns were planted approximately twice as deep as their length.  Finally, I covered the pots with wire to keep the squirrels off them.

Tiny cotyledons emerged about six weeks after planting, but growth has been extremely slow. I noted a germination rate of 20% initially. Nine months after planting, the stems are barely 4 inches tall.  That makes me think that the 6-8-inch seedlings we have caged could be several years old, especially if they were nipped by a rabbit or deer shortly after germination.  I have noticed that a many seedlings that we have caged actually have a “double leader” or main stem, which suggests that sometime in their infancy they were browsed, and it’s amazing that at this vulnerable stage they were able to re-group and sprout again with new leaves. These hardy trees do demonstrate a resiliency – to a point – against adverse conditions.

Post oaks are not common in the nursery trade for these very reasons: their growth rate is slow and unpredictable, and they don’t like to grow in a pot. They seem to have a relationship with soil microorganisms that could be hard to duplicate in nursery production, and the growth pattern that results in their rugged mature growth does not conform to the uniform street tree shape required by most commercial nurseries.

I worry that the post oaks that grace our natural landscape will gradually disappear over the next 75 years.  Will they trudge off into a dusty sunset like the haggard dinosaurs in the old Fantasia movie?  It’s hard to imagine that happening to such a gnarled and majestic tree, but I don’t see how they can adapt to increasing pressures of over-browsing  and increased aridity in enough numbers that can replace the older trees we now see so abundantly.  If you prize this tree, keep your eyes peeled for young seedlings and protect them by caging. It’s a lot easier than planting a seedling, and your grandchildren will thank you for it.